The data this week comes from Gentry et al. by way of DataIsPlural. It contains the reasons for CEO departure in S&P 1500 firms from 2000 through 2018.

I always take roughly the same approach when analyzing data that is already reasonably cleaned but not fully tidy yet. Depending on the type of data, additional steps are necessary and some others may be skipped.

Here are the steps I’m going to take:

The goal is to come up with 2-3 insightful, publication ready visualizations.

Load data and get an understanding 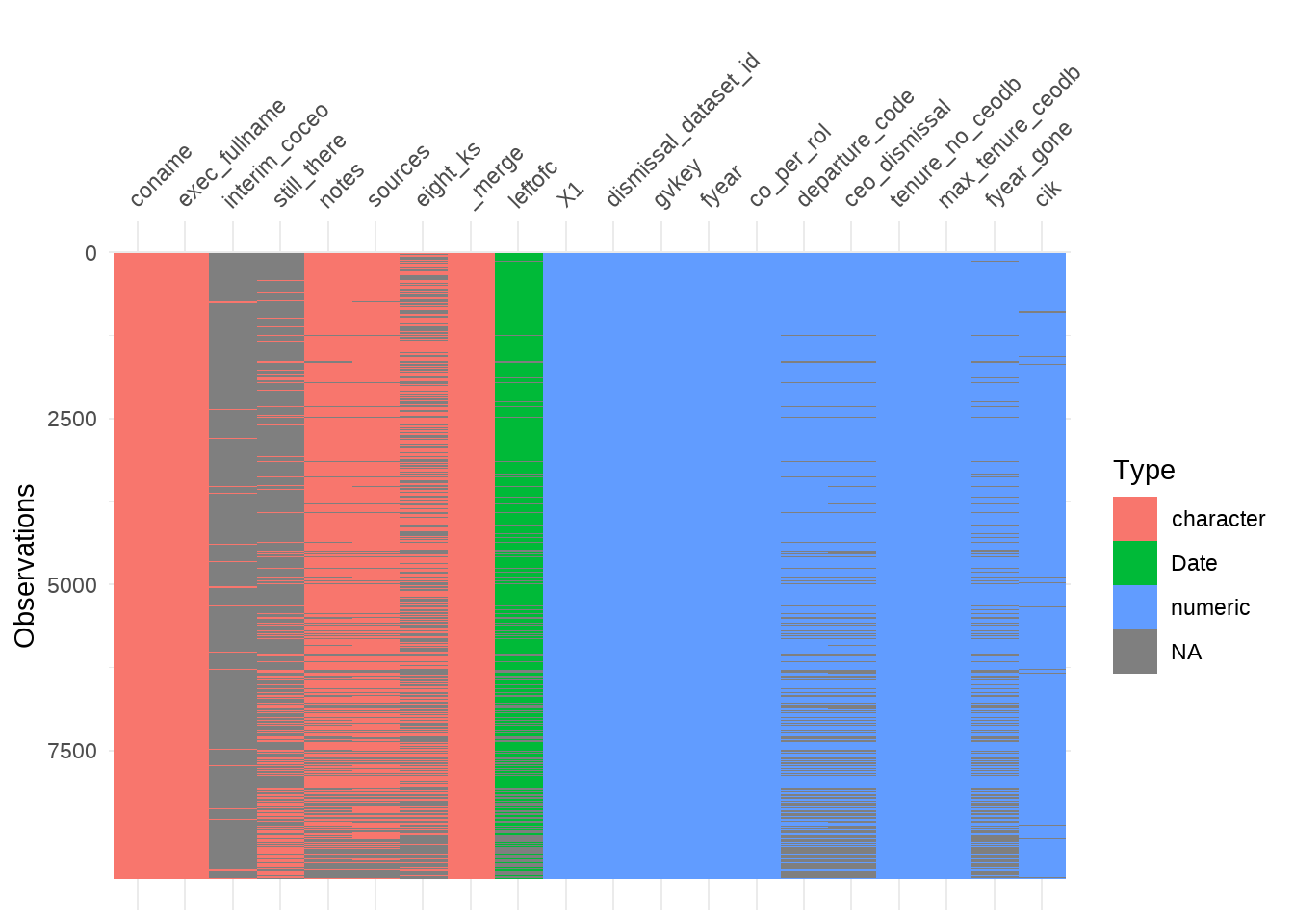 Alright so there are 20 columns with 9423 observations. Some character and some numeric columns and one date/time column. There are missing values but they seem mostly “natural” in a sense that they just mean, that the column doesn’t apply to that observation (e.g., interim_coceo: most CEO are not interim CEOs).

Ok, looks like there are not many variables that actually explains more precisely why a CEO might have departed the way he did (e.g., the competition had stronger growth, winnings declined etc.). So the main point of the data set is to compare the reasons for departure as given by the data set.

Here are a couple of questions that come to my mind:

Lets start by getting a feel for what the distribution of departure is overall. 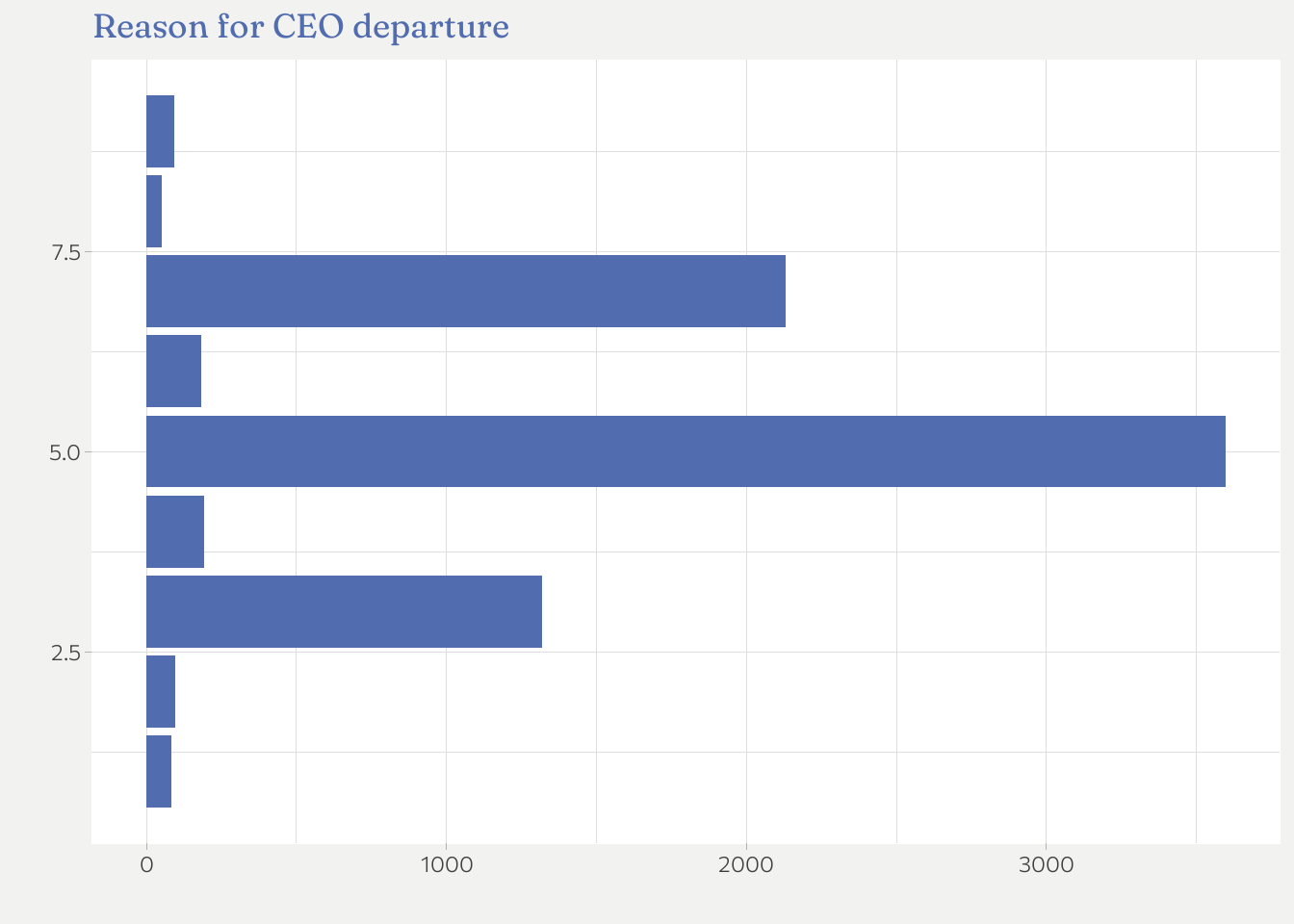 This is a unpolished raw first plot.1

Before I continue, I am going to do to some data wrangling

So here is the first plot (+ polishing). 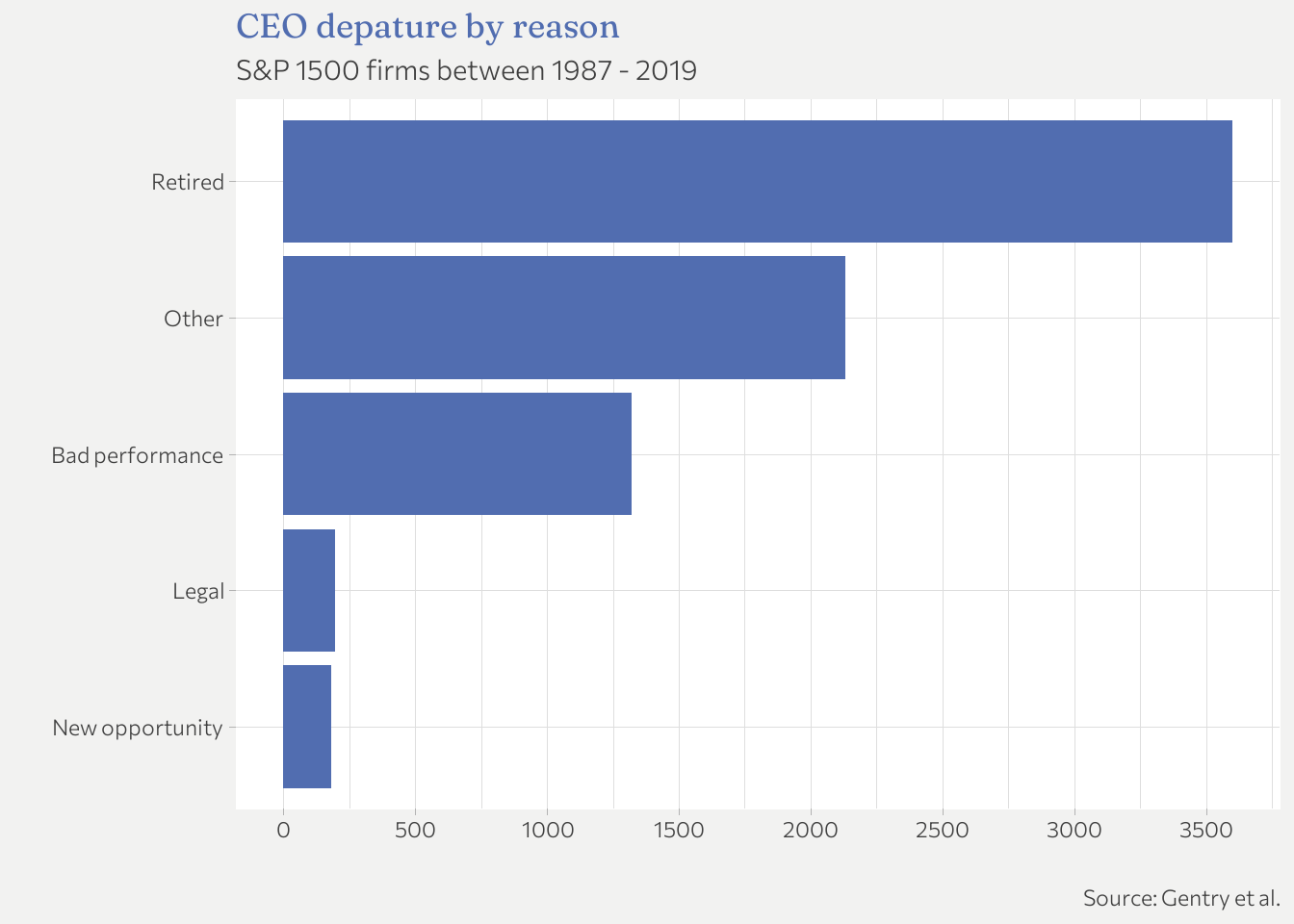 Most CEOs retire or they leave their position because of a merger, restructuring or some other event subsumed in “Other”. The most interesting to me, however, are bad performance and legal. I will focus on them more.

Question 2: Reason for departure over time

Lets see if there are any changes over time. 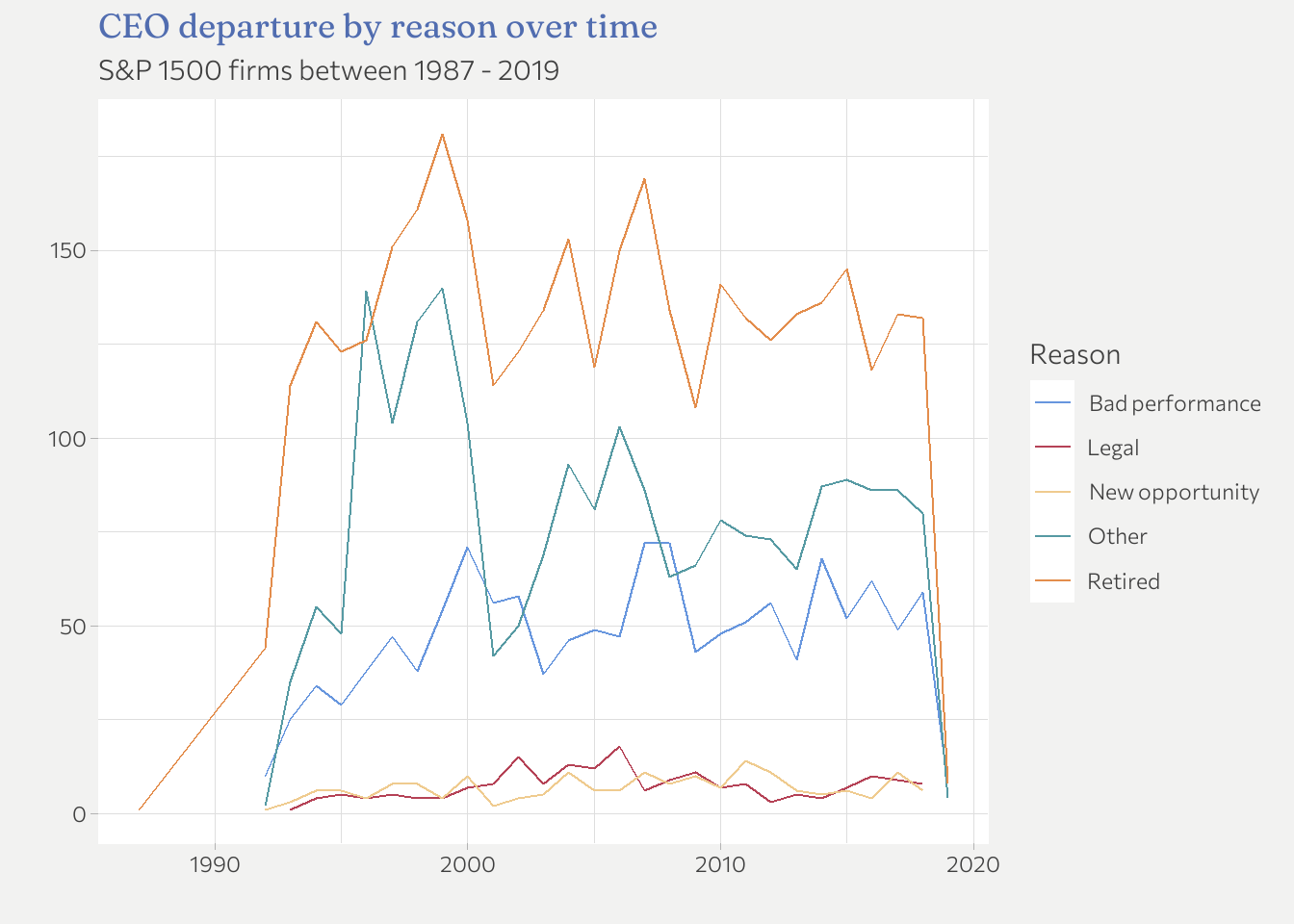 I think its better to look at ratios than absolute numbers here because there are not always the same number of departures per year (especially at the beginning and the end of the time period available). I delete 1987 as it not representative with n = 1. In addition, the order of the labels should match the lines. 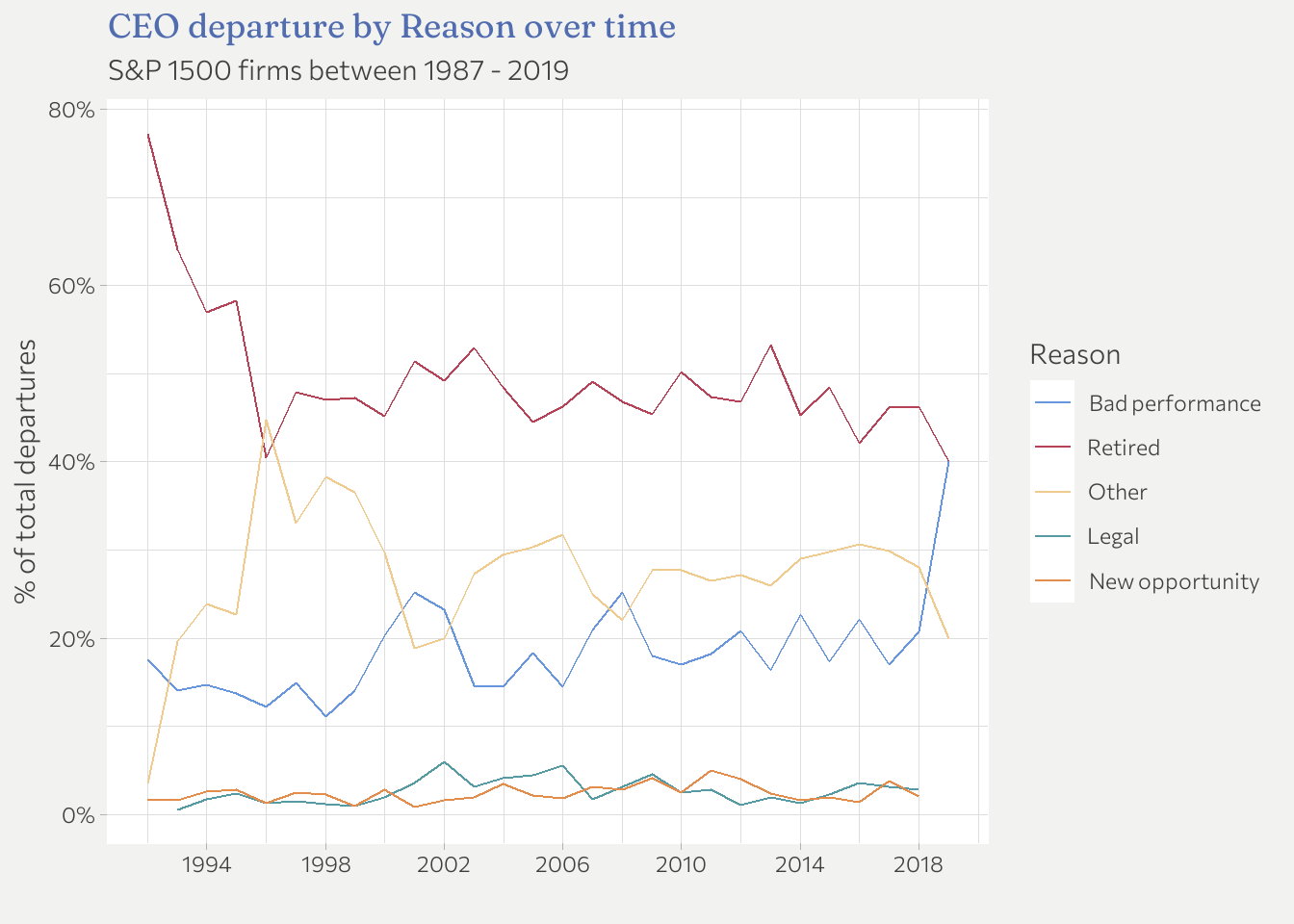 I don’t see any obvious patterns. Maybe a slight increase in “Bad performance” departures over the years. But its not particularly pronounced.

First I get all CEO that appear at least twice.

Ok, there are 471 CEO that appear at least twice in the data. This is something to work with. Lets take a look:

There are only a few left that appear more than 2 times. 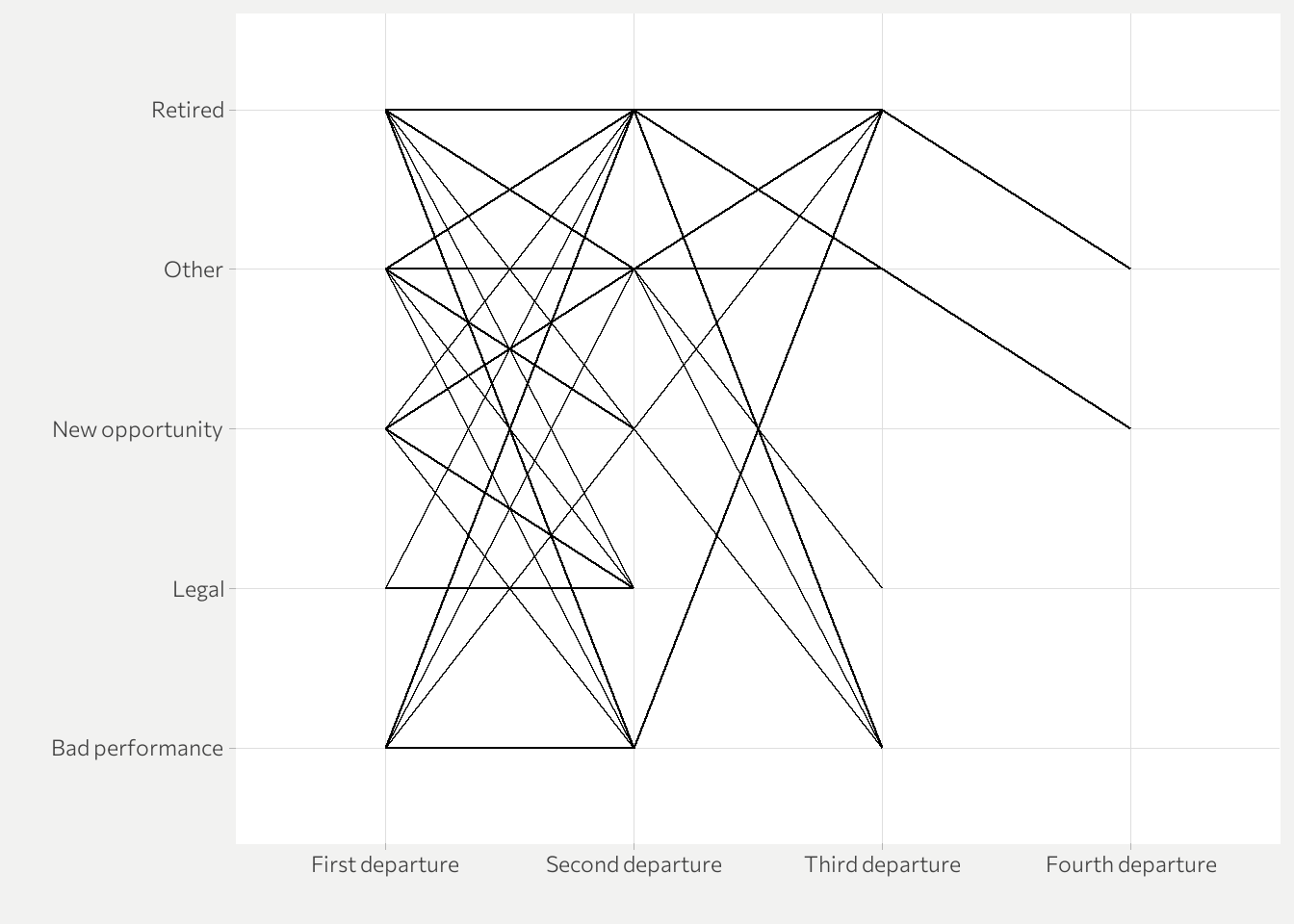 This is not really meaningful yet. A couple of things will help.

For the latter I am going to use the alpha parameter and the size aesthetic. (This took me a while to figure out…) 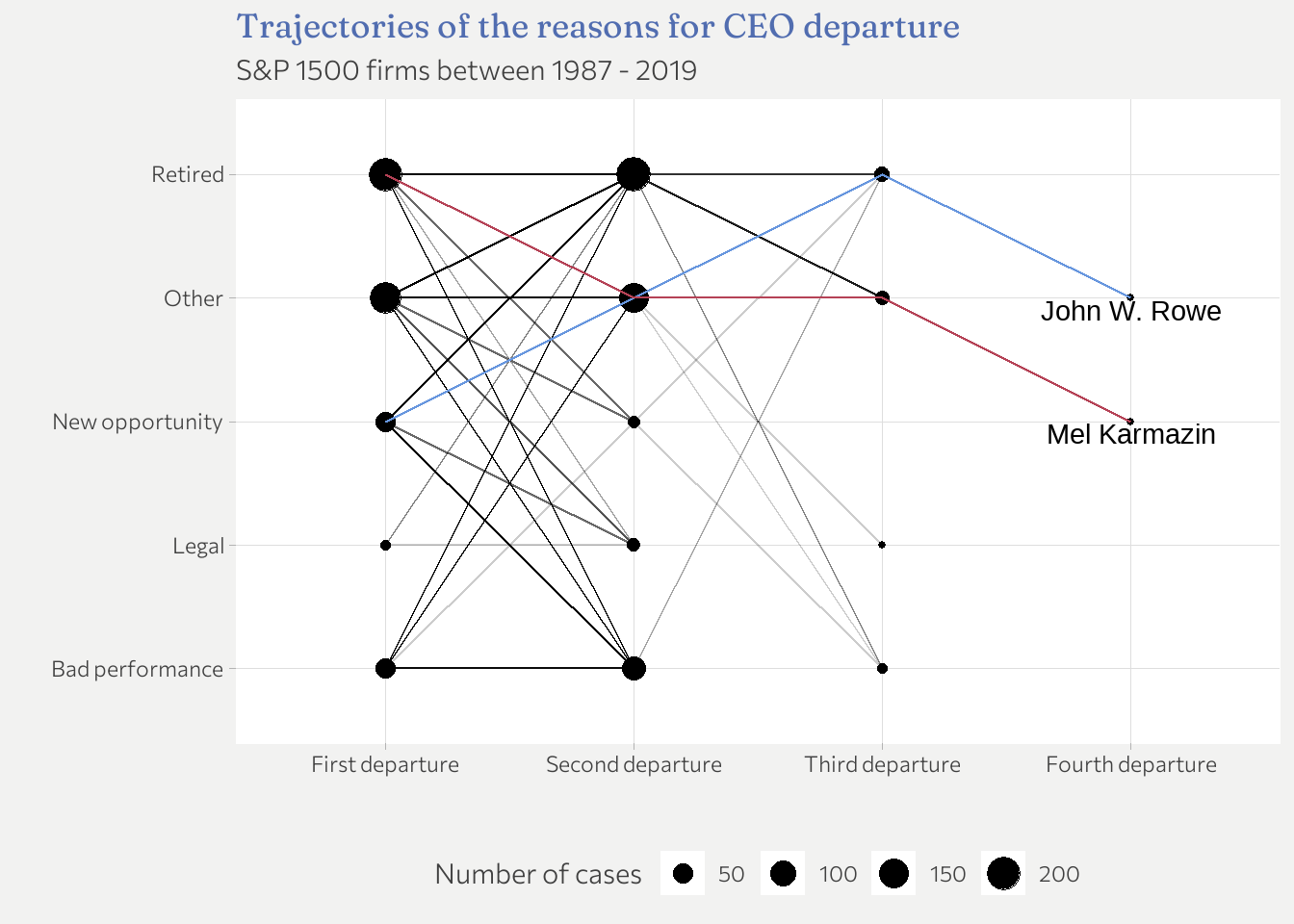 Two CEOs appear 4 times in the data set. None of them left for legal or bad performance reasons. Interestingly, retirement doesn’t seem to be “final”. Some CEO come back. All in all, there is no overwhelmingly clear connection but certainly some interesting insights.

That’s it for this data set. There is of course always more to discover, however, I already used more time than I planned because it took me a while to figure out how to make the last plot. I had never really used the size aesthetic before so there was some trial and error necessary in order to find out how to use it most effectively. 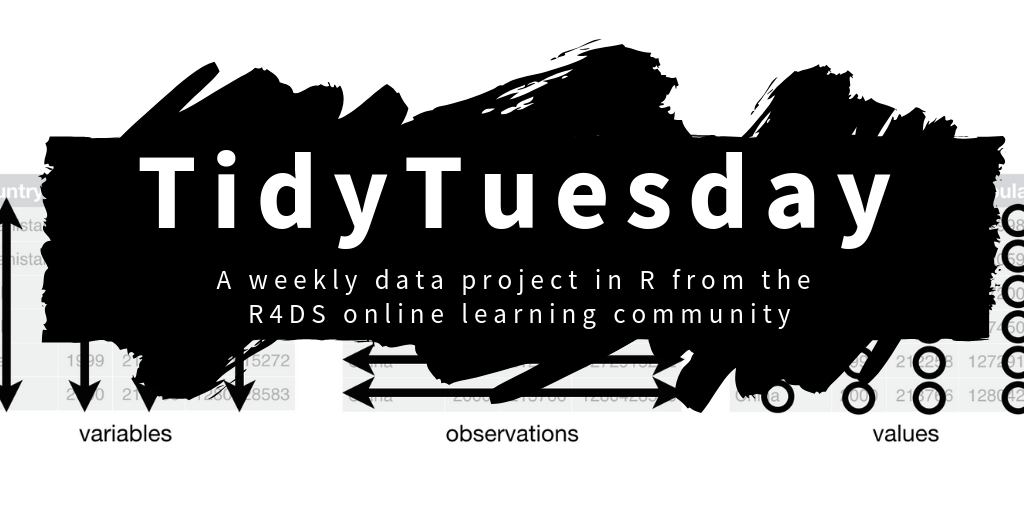 I consider data analysis just like a sport: to become or stay good at it regular training is required. In this series, I analyze interesting data sets provided by the great R Tidy Tuesday data project as a mean “to stay in shape”.

(Self-inflicted) rules: I give myself roughly 90 minutes for the analysis and an extra 30 minutes for documenting.

Needless to say, the analysis and the documentation are not meant to be exhaustive and perfect in this case.

I try to write one or two of these analysis per month.

Tidy Tuesday was born out of the R4DS (R for data science) Online Learning Community and the R for Data Science textbook written by Hadley Wickham and Garrett Grolemund. Every week a “tamed” new data set (i.e. data is partly preprocessed but not completely tidy) alongside an article or a source is posted on the Tidy Tuesday GitHub repository.

The goal is to explore this data set using data wrangling and summarizing techniques and (lots of) insightful visualizations.